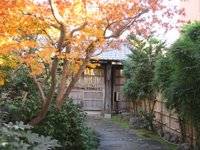 "In the early days of the Meiji era there lived a well-known wrestler called O-nami, Great Waves.

"O-nami was immensly strong and knew the art of wresting. In his private bouts he defeated even his teacher, but in public was so bashful that his own pupils threw him.

"O-nami felt he should go to a Zen master for help. Hakuju, a wandering teacher, was stopping in a little temple nearby, so O-nami went to see him and told him of his great trouble.

"'Great Waves is your name,' the teacher advised, 'so stay in this temple tonight. Imagine that you are those billows. You are no longer a wrestler who is afraid. You are those huge waves sweeping everything before them, swallowing all in their path. Do this and you will be the greatest wrestler in the land.'

"The teacher retired. O-nami sat in meditation trying to imagine himself as waves. He thought of many different things. Then gradualy he turned more and more to the feeling of waves. As the night advanced the waves became larger and larger. They swept away the flowers in their vases. Even the Buddha in the shrine was inundated. Before dawn the temple was nothing but the ebb and flow of an immense sea.

"In the morning the teacher found O-nami meditating, a faint smile on his face. He patted the wrestler's shoulder. 'Now nothing can disturb you,' he said. 'You are those waves. You will sweep everything before you.'

"The same day O-nami entered the wrestling contests and won. After that, no one in Japan was able to defeat him."

At first glance, this story might suggest that all we have to do is get our minds right and we can defeat anybody. But it is important to remember that O-nami had great fighting skills before he spent the night in the temple, and that his timid spirit was his only barrier.

There's a good reason we say "body, mind, spirit" in the martial arts and not "spirit, mind, body."

The first expression describes the proper order for training and development, while the second describes the origination of technique for those already well trained.

Nicklaus Suino teaches iaido and other martial arts at seminars throughout North America. Information about his seminars can be found at www.artofjapaneseswordsmanship.com. He teacher iaido, judo, and jujutsu at the Japanese Martial Arts Center in Ann Arbor, Michigan, home of the University of Michigan.
Posted by Nicklaus Suino at 6:21 AM 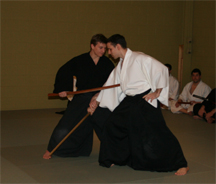